Federal drug crimes are notoriously complex that require enlisting the help from a skilled and knowledgeable federal crimes defense lawyer. Federal agencies like the DEA, FBI, and ATF aggressively pursue drug offenses and utilize unlimited resources to ensure the accused later stands convicted. The penalties for a federal drug conviction can be substantial – even carrying a mandatory minimum prison sentence. You must protect yourself with competent representation to ensure that you are properly informed of all your options.

Investigation for drug trafficking, manufacturing, and conspiracy cases are often by federal agencies. However, certain drug “task forces” are comprised of local police officers who provide assistance to federal agencies. Investigations usually originate from confidential informants or charged defendants who cooperate to obtain a favorable sentence.

Investigations can last for years before you are arrested, because the statute of limitations for most federal crimes is five (5) years. Investigations for a prolonged period only build momentum over time. This makes the intervention of an attorney much more time sensitive. Investigators often recover a substantial amount of evidence in large scale drug operations including: 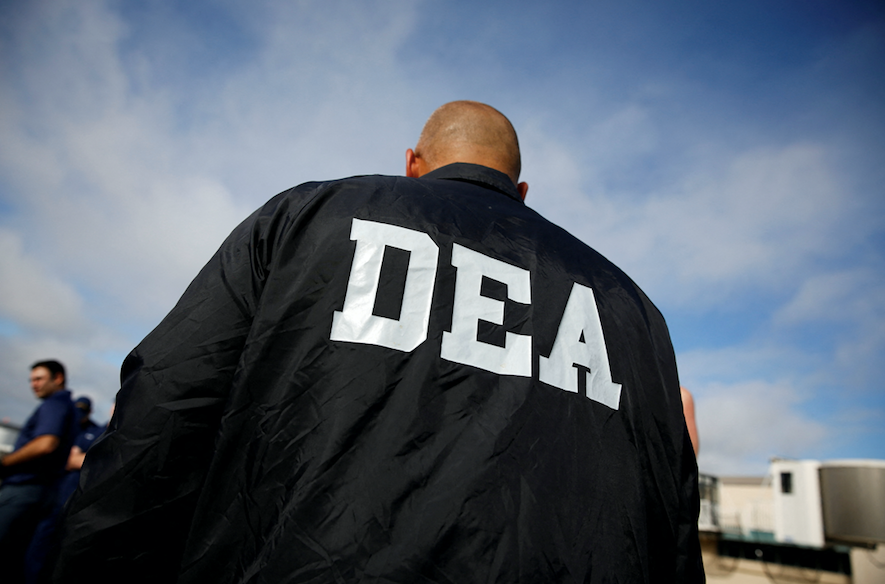 The DEA is a federal agency that investigates drug trafficking offenses

Federal drug charges are very different than similarly prosecuted crimes at the state level. Not all criminal lawyers handle federal matters because it requires a different set of rules and procedure. Therefore, retaining an inexperienced lawyer may unnecessarily subject you to greater punishment.

Federal criminal drug crimes attorney John D. Rogers has experience with all types of drug charges. He is a board-certified criminal law specialist by the state bar of California – rare recognition that only a small percentage of California lawyers have achieved. He stands ready to intervene at any stage of a drug case and his success is recognized by the hundreds of satisfied clients. Early retention of our office can mean the difference of serving a prison sentence or getting your case rejected entirely from prosecution.

Federal drug crimes are generally charged under 21 U.S.C. § 841(a)(1). The statute makes it a crime to knowing and intentionally:

The government can also obtain an indictment against you by way of conspiracy. Co-conspirator liability carries the same punishment were you to commit the actual intended crime. For instance, simply being part of a text message group thread could entangle you in a multi-defendant drug conspiracy.

The federal drug sentencing scheme is one of the most complex areas in criminal law. The punishment is based on a number of factors including:

Each drug offense is unique in that it may carry its own advisory sentence. The U.S. Sentencing Commission issues a set of advisory guidelines for judges to consider. Accordingly, a judge will first begin with what the sentencing commission has recommend based on the defendants offense. However, a judge must also consider a defendants personal history, background, and the nature and characteristics of the offense at a sentencing hearing.

Some drug crimes carry mandatory minimum sentences between 5 to 20 years in federal prison. In other words, a conviction requires you to serve between 5 to 20 years. For instance, even first-time offenders charged with possessing two ounces of pure methamphetamine with the intent to distribute it will subject them to a mandatory minimum of 10-years in federal prison. The penalties may increase to a 20-year mandatory minimum if you suffer from a prior drug conviction or the distribution resulted in the death of someone. There are ways around a mandatory minimum sentence requirement. Therefore, retaining an attorney with prior federal drug crime experience is paramount to your future.

The following quantities trigger a mandatory minimum of 5-years in federal prison:

The following quantities trigger a mandatory minimum of 10-years in federal prison:

Not only are you facing a lengthy prison sentence and a large fine, but other unanticipated consequences may follow when convicted of a drug offense.

There are rehabilitative programs available for low-level offenders who suffer from addiction. Drug programs are aimed to avoid incarceration and provide a defendant with a rare opportunity for a second chance. Moreover, the spirit of the program is to provide drug treatment, education programs, and support to help offenders live a law-abiding life. Alternative sentencing options are usually available to first-time offenders, defendants who suffer from mental illness and/or addiction, and pose no public safety risk.

Our primary goal is to produce the best possible outcome for our clients. This includes a dismissal of the charges, acquittal at trial, or zealously advocating for the case to be rejected from prosecution during its investigation stages. We will fully explore every aspect of your case including all viable defenses and case technicalities.

The government often rests upon unreliable information conveyed by individuals and confidential informants. These witness are either attempting to obtain a reduced sentence or are being compensated by federal agents for their cooperation. Exposing their motivations to lie and illustrate to a court and jury why their testimony should be discredited is absolutely necessary.

If evidence was seized in violation of your Fourth Amendment right, then we will move to suppress that evidence from your case. These constitutional violations usually arises in search warrant technicalities, unlawful traffic detentions by law enforcement, or by providing involuntary consent to search your home, vehicle, or electronic devices. If a Fourth Amendment violation occurred, then the Court will order the evidence suppressed. In most instances, the case will be dismissed because the prosecutor will be unable to proceed with their case.

An essential element for drug trafficking is that the defendant intended to distribute/sell the substance. The accused may be a heavy user and purchase their personal supply in bulk. There can also be a lack of indicia of street sales – e.g., digital scales, large quantity of cash, individual baggies, or pay-owe sheets. Furthermore, merely being present at the scene of a drug crime, without more, is insufficient to constitute possession.

Lacking knowledge of the substances presence is a defense to distribution and manufacturing. Someone may not know that they were in possession of a controlled substance or exercised carelessness in knowing of its presence.

Protect Yourself with Our Federal Drug Crime Attorneys

If you have been accused of a federal drug crime, then you need experienced protection. Drug convictions cause devastating impacts on individuals and families that are forever lasting. Choose the right lawyer that will aggressively represent your rights and advocate for your freedom. Contact us today to schedule a free consultation with a respected Orange County federal criminal defense attorney. Early retention of our office can mean the difference of serving a lengthy prison sentence or stopping the case from ever reaching the inside of a courtroom. We represent clients charged federal drug crimes in Orange County, Los Angeles, Santa Ana, and Riverside.