Drug distribution is accomplished by facilitating the transfer of the substance to another regardless of profit or financial interest.[2] The prosecutor ordinarily relies on the following factors to show indicia of sales:

Federal investigations can last for years because the statute of limitations for most federal drug crimes is five (5) years.[4] Thus, a grand jury indictment can be issued against you for instances that occurred years previously. It is not uncommon for someone to be entangled in a multi-defendant drug conspiracy in large scale operations with very little knowledge or involvement. Without notice, federal agents storm into your home with a search warrant and arrest you. 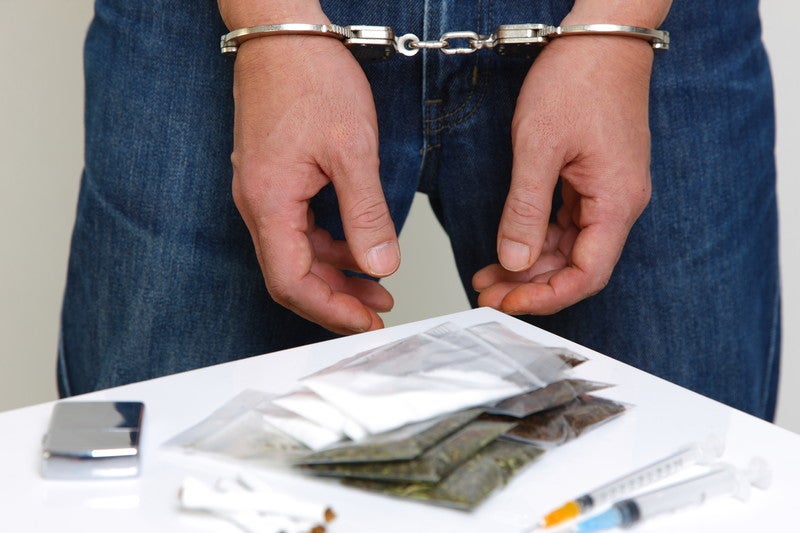 What is the Government Required to Prove?

To prove federal drug distribution, the government is required to prove the following elements beyond a reasonable doubt:

The federal sentencing guidelines provide advisory sentences for the judge to consider. The judge will also consider an offenders personal history, background, and nature and characteristics of the offense. Generally, a trafficking offense carries a statutory maximum sentence of 40 years or life in prison, in addition to millions of dollars in fines. However, the punishment for federal drug trafficking largely depends on the following factors: 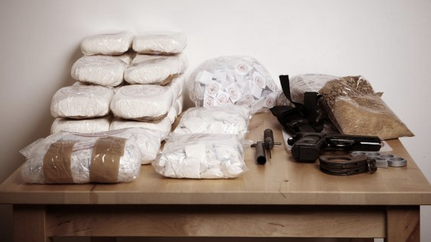 Narcotics trafficking crimes are one of the most severely punished in the United States. Most offenses carry a mandatory minim sentence even for first-time offenders.

If you suffer from a prior conviction for a serious drug felony[14] or serious violent felony[15], then you must serve a mandatory minimum of 15 years in prison.[16]

If death or serious bodily injury[17] results from the distribution, then it requires a mandatory minimum sentence of 20 years to life in federal prison and a fine up to $5 million.[18]

If death or serious bodily injury results, and you have previously been convicted of a serious drug felony or serious violent felony, then the law requires a mandatory life sentence.[19]

The following quantities trigger a mandatory minimum of 10-years in federal prison:

If you suffer from a prior conviction for a serious drug felony or serious violent felony, then your sentence doubles to a mandatory minimum of 20 years.[28]

If death or serious bodily injury results, then a first-time offender must be sentenced to a mandatory minimum of 20 years.[29]

If you suffer from 2 or more prior serious drug felonies or serious violent felonies, then the law requires that you serve life in prison.[30]

A safety valve is a statutory mechanism that permits the judge to sentence an offender to below the mandatory minimum. To qualify for a safety value, the following requirement must be met prior to the sentencing hearing:

Are There Sentencing Alternatives to Incarceration?

Some low-level offenders may be eligible to participate in rehabilitative programs in lieu of incarceration. These programs allow a defendant the rare opportunity to receive drug or mental health treatment and life skills training. Alternative sentencing programs are usually available for first-time offenders, low-level offenders, and those who do not pose a risk to public safety.

What are the Related Crimes to Drug Distribution?

Conspiracy with the Intent to Distribute

Conspiracy in connection with drug trafficking is charged under 21 U.S.C. § 846. To sustain conviction for conspiracy to possess with intent to distribute cocaine, government must prove that (1) an agreement existed to violate federal narcotics laws, (2) defendant knew of existence of agreement, and (3) the defendant voluntarily participated in conspiracy.[36] It is punishable in the same manner as actually distributing the substance.[37]

Money laundering is charged under 18 U.S.C. § 1956 and 18 U.S.C. § 1957 making it a crime to use financial channels as a means to hide the source or destination of illegitimate money. It is not uncommon for federal prosecutors to charge you with money laundering in connection with drug trafficking. The crime is punishable by up to 20 years in federal prison.

Felon in Possession of a Firearm

Possession of a firearm by a prohibited person is charged under 18 U.S.C. § 922(g) making it a crime for certain individual to own or possess a firearm. This charge is commonly applicable to someone who suffers from a prior federal or state federal conviction. A conviction carries a statutory maximum of 10 years in prison.

Use of a Firearm in Furtherance of a Drug Trafficking Crime

If you are under investigation for a federal drug charge, then you must enlist the help of an experienced Orange County federal criminal defense attorney. Early intervention is paramount because our office may be able to legally deflect the government's case against you and stop the case from ever reaching a courtroom. Contact us to schedule a risk free confidential consultation. We primary represents clients in Los Angeles, Santa Ana, and Riverside.

Attorney John D. Rogers provides premier and effective representation for all his clients who find themselves charged in the criminal justice system. He is an accomplished trial attorney and a board certified criminal law specialist – a distinction that only a small percentage of California attorneys have achieved. His qualifications and experience have been recognized by hundreds of satisfied clients.

[2] See United States v. Bouck, 877 F.2d 828 (10th Cir. 1989) (“The quantity of drug possessed in a circumstance which may permit inference that the possessor intended to sell, deliver, or otherwise distribute it.”)

[3] See United States v. Zapata-Tamallo, 833 F.2d 25 (2d Cir. 1987 (finding it implausible to convict the defendant of simple possession when defendant was found to have 7½ kilograms of cocaine, an excess of that required for personal use); See also United States v. Gaviria, 740 F.2d 174 (2d Cir. 1974) (Holding that the evidence amply supported the jury's verdict, where, given the quantity of cocaine discovered in the defendant's apartment —almost 1½  pounds (approximately 681 grams) of cocaine, varying in purity from 51.7 to 94.2 percent—the jury reasonably could have inferred an intent to distribute); United States v. Renteria, 625 F.2d 1279 (5th Cir. 1980) (Court remarked that 2 ounces constituted a commercial quantity of cocaine).

[4] See 18 U.S.C. § 3282 (“Except as otherwise expressly provided by law, no person shall be prosecuted, tried, or punished for any offense, not capital, unless the indictment is found or the information is instituted within five years next after such offense shall have been committed.”)

[17] See 18 U.S.C. § 802(25) – (“The term “serious bodily injury” means bodily injury which involves— (A) a substantial risk of death; (B) protracted and obvious disfigurement; or (C) protracted loss or impairment of the function of a bodily member, organ, or mental faculty.”)

[31] See 18 U.S.C. § 3553(f)(1)-(5) – (“Notwithstanding any other provision of law, in the case of an offense under section 401, 404, or 406 of the Controlled Substances Act (21 U.S.C. 841, 844, 846), section 1010 or 1013 of the Controlled Substances Import and Export Act (21 U.S.C. 960, 963), or section 70503 or 70506 of title 46, the court shall impose a sentence pursuant to guidelines promulgated by the United States Sentencing Commission under section 994 of title 28 without regard to any statutory minimum sentence, if the court finds at sentencing, after the Government has been afforded the opportunity to make a recommendation, that— (1) the defendant does not have— (A) more than 4 criminal history points, excluding any criminal history points resulting from a 1-point offense, as determined under the sentencing guidelines; (B) a prior 3-point offense, as determined under the sentencing guidelines; and (C) a prior 2-point violent offense, as determined under the sentencing guidelines; (2) the defendant did not use violence or credible threats of violence or possess a firearm or other dangerous weapon (or induce another participant to do so) in connection with the offense; (3) the offense did not result in death or serious bodily injury to any person; (4) the defendant was not an organizer, leader, manager, or supervisor of others in the offense, as determined under the sentencing guidelines and was not engaged in a continuing criminal enterprise, as defined in section 408 of the Controlled Substances Act; and (5) not later than the time of the sentencing hearing, the defendant has truthfully provided to the Government all information and evidence the defendant has concerning the offense or offenses that were part of the same course of conduct or of a common scheme or plan, but the fact that the defendant has no relevant or useful other information to provide or that the Government is already aware of the information shall not preclude a determination by the court that the defendant has complied with this requirement. Information disclosed by a defendant under this subsection may not be used to enhance the sentence of the defendant unless the information relates to a violent offense.”)

[32] See 18 U.S.C. 3553(e) – (“Upon motion of the Government, the court shall have the authority to impose a sentence below a level established by statute as a minimum sentence so as to reflect a defendant's substantial assistance in the investigation or prosecution of another person who has committed an offense. Such sentence shall be imposed in accordance with the guidelines and policy statements issued by the Sentencing Commission pursuant to section 994 of title 28, United States Code.”)

[33] However, lack of knowledge is not always a complete defense if someone exercises willful blindness to the substances presence. See United States v. Jewell, 532 F.2d 697, 700 (9th Cir. 1976) (en banc) (“The substantive justification for the rule [that willful blindness is equivalent to knowledge] is that deliberate ignorance and positive knowledge are equally culpable.”)

[35] The U.S. Supreme Court made entrapment a complete defense to a criminal charge on the theory that “Government agents may not originate a criminal design, implant in an innocent person's mind the disposition to commit a criminal act, and then induce commission of the crime so that the Government may prosecute.” See Johnson v. United States, 503 U.S. 540, 548 (1992).

[37] See 21 U.S.C. § 846 (“Any person who attempts or conspires to commit any offense defined in this subchapter shall be subject to the same penalties as those prescribed for the offense, the commission of which was the object of the attempt or conspiracy.”)