Explanation of “Immunity” in Federal Prosecutions 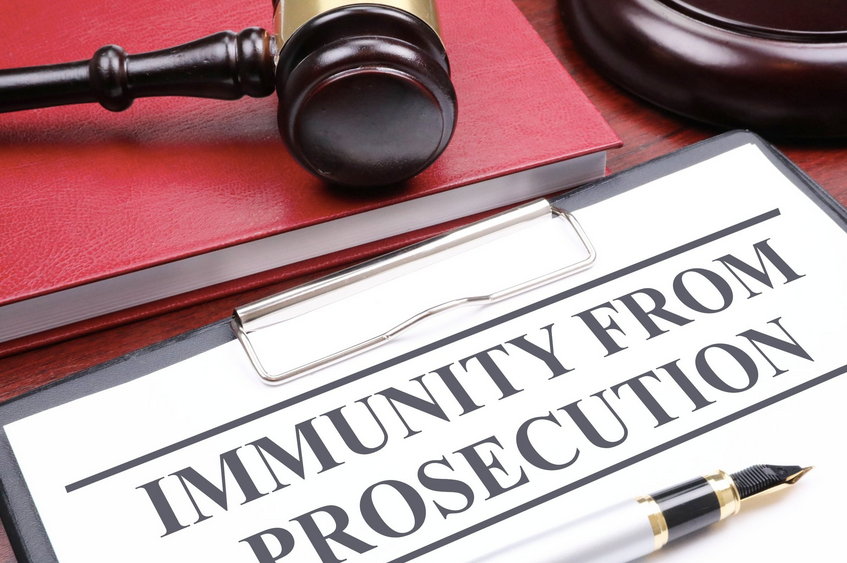 Federal prosecutors may provide immunity to a culpable person to obtain evidence to prosecute others. A person receiving immunity cannot be prosecuted using their compelled statements. Accordingly, an individual provided with immunity cannot assert their Fifth Amendment right against self-incrimination because they are not being forced to assist in their own prosecution.

Immunity protects an individual from criminal prosecution. Because an entity or organization has no Fifth Amendment privilege, it cannot receive immunity.[1] Immunized testimony may be used in noncriminal proceedings like:

Immunity can also extend to civil proceedings that a court finds to be “criminal in nature.”[5] For example, it's applied to civil forfeiture actions to recover from the participants of a criminal scheme or enterprise.[6] However, immunity does not apply to civil liabilities.[7]

Impermissibly using compelled testimony can include the government using the information to assist with:

The government ordinarily ensures that a defendant's immunized testimony is not disclosed in a sentencing hearing.

The remedy for the prosecutor's improper use of immunized testimony depends on the circumstances. For instance, if the testimony:

If an individual receives derivative use immunity, the prosecutor can still prosecute the person for:

The government exceptions in the statute only apply to acts after the grant of immunity and not to previous acts. For instance, the government cannot use a witness's truthful testimony after receiving immunity to prosecute for:

The prosecution can also prosecute a person with derivative use immunity for the offense they testified about if the government uses only evidence that does not stem from the immunized testimony. Before prosecuting, the prosecutor must obtain written approval from the Attorney General.

To prosecute, the government must show by the preponderance of the evidence that all the evidence it introduces is from an independent and valid source.[17] Courts ordinarily hold a pre-trial evidentiary hearing, called a Kastigar hearing, to determine if the government's proposed evidence is tainted by the defendant's compelled testimony.

In preparing to satisfy their burden that the evidence they propose to use is not tainted, the government typically:

The prosecution's witnesses cannot use another individual's immunized or compelled testimony to:

The prosecution typically seeks or provides immunity if it is confident the witness did not participate significantly in a crime. Prosecutors usually hold witnesses who receive immunity to a higher level of openness and honesty.

If a witness agrees to testify or sit for an interview, if provided immunity, the prosecutor can provide informal derivative use immunity by letter or written agreement. Letter immunity cannot overcome an individual's privilege against self-incrimination. Thus, a person cannot be compelled to testify in return for mere letter immunity. There is no requirement that the prosecutor obtains a court order to grant letter immunity because the witness is not being compelled to testify. This is because the witness has agreed to testify pursuant to an agreement with the government.

If a witness refuses to comply with an order to testify, a court may impose civil contempt and/or criminal contempt.[22] However, the court must exercise the least possible power to compel a witness to testify. Accordingly, a court may determine whether civil or criminal penalties are necessary to achieve compliance.

A civil contempt order may include incarceration until:

Criminal contempt proceedings can only be initiated by grand juries or district courts. A court may summarily punish a person who refuses to testify in the court's presence. However, a court cannot impose a sentence of imprisonment and a fine for a criminal contempt conviction.[23]

If you have been served with a grand jury subpoena or you are under investigation for a federal crime, then contact our office today. It's imperative that an experienced federal criminal defense attorney intervenes at the earliest stage of the case. Call us today to schedule a free confidential consultation.